The survival of Ancient Southeast Asian culture is explored in Dancing Through Death: the Monkey, Magic & Madness of Cambodia. Produced and directed by Janet Gardner, it is the story of Thavro Phim a Cambodian dancer, who came of age under the Pol Pot regime and lost his father, brother and grandfather during the bloody reign of the Khmer Rouge.

Thavro’s dedication to Cambodian Classical dance and to his role as the magical white monkey kept him whole during the ordeal. Controversy in Cambodia over whether to try Khmer Rouge leaders heightens interest in “Dancing Through Death.”

A resident of the United States since 1993, Thavro returned to Cambodia in 1998 for a bittersweet reunion with his family and teachers. The film follows him on that journey.

The centuries-old traditional Cambodian dances tell mystical stories of good and evil, with bejeweled princes, princesses, giants and monkeys as the principal figures. Cambodian dancers had a sacred role. The documentary looks at this cultural history and the ancient empire of Angkor when the Khmer ruled most of Southeast Asia.

It takes its audience to 1975-1979 and conveys the preciousness of the dancers who survived the country’s maelstrom. It tells of the transmission of a culture from generation to generation, mourning for what was lost and celebrating the dance that has survived in the midst of death, displacement, and war.

Mr. Phim was three years old when Pol Pot came to power and enforced a radical agrarian regime. He and anthropologist Toni Shapiro Phim tell the story of Cambodia’s “killing fields” and the classical dancers against the backdrop of their work together, their romance and eventual marriage. Dr. Shapiro Phim studied dance in the refugee camps on the Thai-Cambodian border after the genocidal years during which 90 percent of the dancers had been executed or died of starvation or disease. She shares some of her archival footage in the documentary, considered especially precious because many Cambodian records were destroyed between 1975 and 1979.

The secondary theme of the documentary is the dancers’ mission to preserve their legacy by teaching Khmer dance to children of Cambodian refugees. Personifying the younger generation is Samnang Hor, a 13-year-old monkey dancer with the Angkor Dance Troupe in Lowell, MA, where Thavro was a guest performer. Other young dancers struggle to learn the ancient art in San Jose, CA, where Thavro taught in the 1980’s. The documentary follows Thavro to New Haven, CT, where he joins the Cambodian Genocide Project to document the story of the Khmer Rouge and to search for his own relatives.

Special thanks to The Fund for Investigative Journalism and Mr. John Hyde 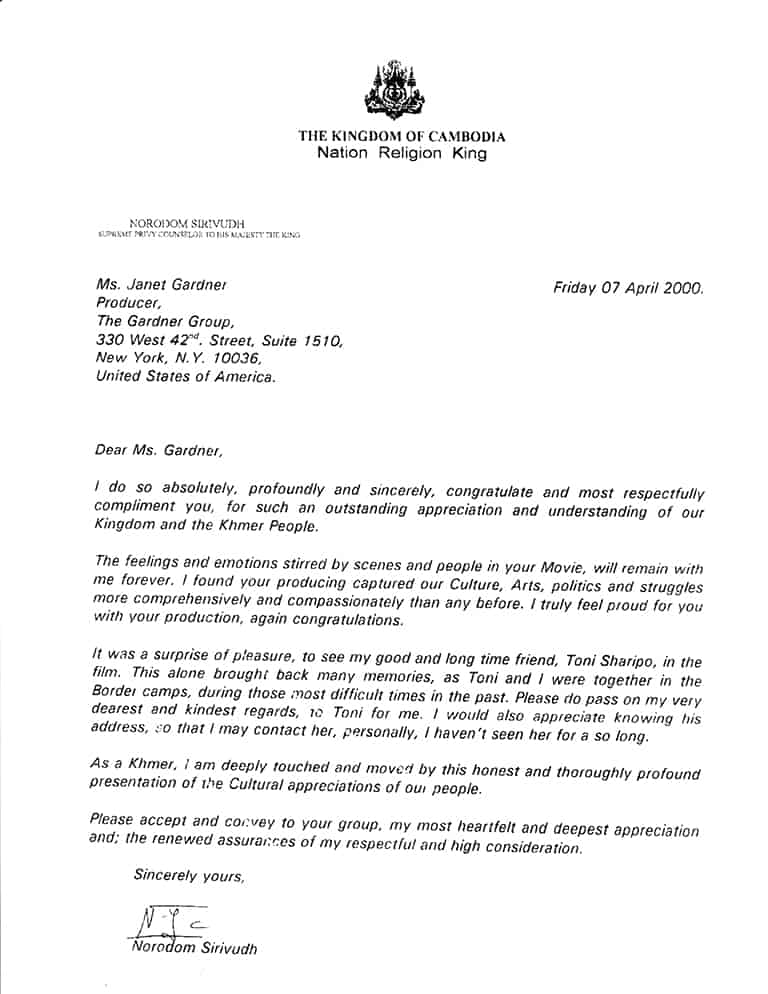 Click the image above to view the letter in a new window (pdf)
A letter from Norodom Sirivudh, Supreme Privy Counselor To His Majesty the King, expressing appreciation for how Dancing through Death presented Cambodia.

The Boston Globe reviewer Karen Campbell viewed it as "a powerful and poignant new documentary…[which] explores how Cambodians in the United States and in their native land are attempting to rebuild their culture after the Pol Pot regime and the Khmer Rouge turned Cambodia into killing fields…It manages to engage, at one turn horrifying, at another uplifting."

"If you know the culture, you know the heart of a country." So believes Proeung Chhieng, dean of the School of Dance at Cambodia's University of Fine Arts, and perhaps nowhere is that claim more evident than in Cambodia, where music and dance is the countries lifeblood.

The powerful and poignant new documentary "Dancing Through Death: The Monkey, Magic and Madness of Cambodia," explores how Cambodians in the United States and in their native land are attempting to rebuild their culture after the Pol Pot regime and the Khmer Rouge turned Cambodia into "killing fields" that wiped out nearly a quarter of the country's population, including 80-90 percent of its dancers and musicians.

When the communist guerrillas of the Khmer Rouge took over the Southeast Asian Country from 1975-1979, they abolished religion, education, and culture in an attempt to wipe out any vestiges of the pervious monarchy. In effect, they turned the country in one vast slave labor camp, torturing overworking, starving, and executing nearly two million people.

Because the country's cultural tradition was largely oral, the death of master dancers, musicians, and teachers meant the loss of priceless traditions. However, as presented in Janet Gardner's compelling documentary, Cambodians are fiercely and proudly determined to restore their cultural identity. The film chronicles some of the more inspiring efforts, including those of the Angkor Dance Troupe in Lowell, where an estimated 30,000 Cambodians have settled, making Lowell the second-largest Cambodian community in the United States, behind only San Diego. The film is a tribute to survival and rebirth. 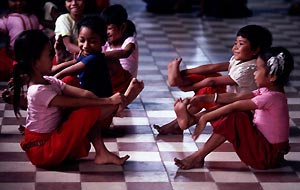 The film follows three generations of dancers dedicated to the acrobatic role of the monkey, the only male role in Cambodian dance. For Thavro Phim, dancing the role has helped him deal with the loss of his family during the Pol Pot regime, enabling him to connect with his personal history and the cultural traditions of his country. For 13-year-old Cambodian-American Samnang Hor, one of the Angkor Dance Troupe's rising starts, the dance is a way to embody and share a past he is just now coming to understand. For the few dancers who survived during the Khmer Rouge, by either keeping their identity a secret, or using the monkey's charming blend of magic and mischief to appeal to their captors, reviving the tradition is a testament of freedom.

The film juxtaposes touching interviews with disturbing news footage from the 1970s, archival material, and current documentation of the cultural activity flourishing today. It manages to engage, at one turn horrifying, at another uplifting.

The most memorable stories are those attesting to artistic dedication, despite all odds. Master teacher Pen Sok Huaon, enslaved by the Khmer Rouge, recalls: "Every time they send me to chop up dirt, I would stop working in order to bend and flex my arms because I have the feeling I would return home. AT nighttime, when I was free from work, I usually sang in secret each song that accompanied the dancers o I would be able to remember them."

In the refugee camps, amidst the daily struggles for survival against inhumane conditions and starvation, music and dance were a priority. Those with the least bit of basic knowledge would teach their skills to the others in order to keep the culture alive. In turn, the culture keeps them alive. As Toni Shapiro-Phim of Yale's Cambodia Genocide Program puts it, "For those few hours a day, they were beautiful and in control."

DANCING THROUGH DEATH: THE MONKEY, MAGIC AND MADNESS OF CAMBODIA
Produced and directed by: Janey Gardner
On: WGBX-TV (Ch. 44)
Time: Sunday, 10-11 p.m.