At Tu Du Hospital in Saigon, babies in a special unit have enlarged heads or are missing limbs. Pham Thi Thuy Linh,born without arms, writes with her feet. A boy with a shrunken leg careens around the corridor in a wheelchair.

Thirty years after the end of the Vietnam war, they are among several millions of victims of Agent Orange. In The Last Ghost of War, we meet victims who are plaintiffs in a class action suit against 32 US chemical companies. Attorneys, activists and scientists take us to a new battlefield.

These Vietnamese victims are seeking compensation and justice. The question is were these dioxin-laden herbicides chemical weapons? And if so, who should be held accountable in the wake of what was allegedly the largest chemical warfare operation in history?

Special thanks to The Fund for Investigative Journalism and Mr. John Hyde

“Although the U.S. Court of Appeals for the Second Circuit denied their appeal, the Vietnamese victims of Agent Orange and their lawyers have petitioned the U.S. Supreme Court to consider reinstating the case against the manufacturers.”

Newsday’s Robert Keeler called Last Ghost of War "a must-see" and "a catalyst for a much needed national dialogue on Agent Orange."

The lingering tragedy of the herbicide Agent Orange, here in America and especially in Vietnam, is the subject of a hard-to-watch-but-must-see documentary, "The Last Ghost of War." So far, it has appeared in small settings, on college campuses and last week at the Asia Society in Manhattan. But it deserves a far wider audience, as a catalyst to a much-needed national conversation on Agent Orange.

It's hard to watch because it does not shrink from showing deformed Vietnamese children. Their parents were exposed to the herbicide that our armed forces sprayed widely, to remove the jungle that hid the Viet Cong and North Vietnamese Army. It also focuses on a Long Island couple, Michael and Maureen Ryan. Their daughter, Kerry, was born with 22 birth defects after Michael's exposure to Agent Orange.

It's a must-see because we need to reflect on how little our nation has done to address the harm that so many attribute to dioxin, the toxic contaminant in Agent Orange.

The courts haven't helped Vietnamese victims. In 2005, a federal judge dismissed their lawsuit; their appeal will be heard in June. In the wider court of public opinion, this film by The Gardner Documentary Group can be a powerful tool. The Public Broadcasting Service is considering the film for its national schedule. Our advice: PBS should air it. 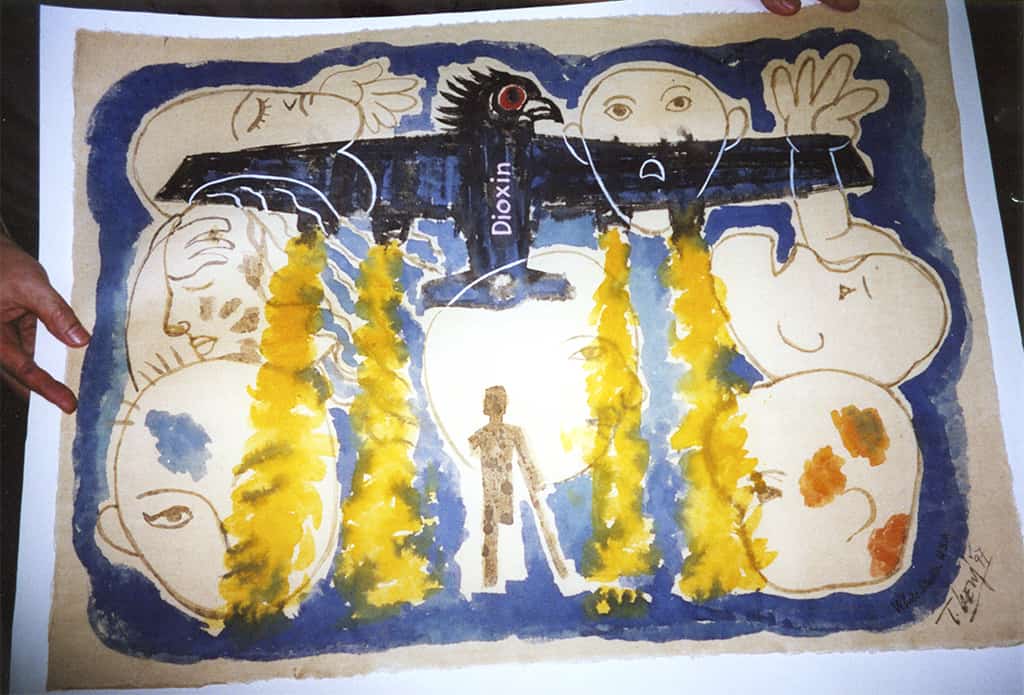 This "Dioxin Bird" painting by Pham Thanh Liem recalls the C-130s that sprayed 20 million gallons of Agent Orange defoliant on Vietnam. Janet Gardner's film also deals with efforts by Vietnamese victims to obtain redress in U.S. courts; the dismissal of their lawsuit in 2005 is being appealed.

One was an armless 12-year-old girl who had learned to write with her feet. Some kids moved in wheelchairs. Others moved hardly at all.

The possible cause of the children's condition was the reason for Gardner's visit - and the force that propels her new documentary, The Last Ghost of War.

Thirty years after the end of the Vietnam War, the legacy of Agent Orange still tortures the Southeast Asian land. In a 57-minute film, Gardner and co-producer Pham Quoc Thai examine the defoliant's harrowing impact on three generations of Vietnamese, following the story onto a new battlefield, a class-action lawsuit brought by aggrieved Vietnamese against 32 U.S. chemical companies.

The old news footage at the start of The Last Ghost of War is grainy but familiar - giant C-130 cargo planes, soaring above the jungle canopy, trailing long white clouds of vapor. Between 1962 and 1971, the U.S. military sprayed an estimated 20 million gallons of Agent Orange on South Vietnam. The goal was to improve visibility for American ground troops and deny forest cover to the enemy.

But Agent Orange contained traces of dioxin, among the most deadly materials known to man. Many Americans and Vietnamese later developed cancers, their children sometimes born with profound disabilities.

"It's very hard to prove that Agent Orange caused birth defects," said coproducer Pham, who was born and raised in Na Trang, north of the huge American military base at Cam Ranh Bay, and came to the United States at age 18 in 1971. But the law permits action against makers of products that might be proven injurious, so "it's potentially a big case."

Vietnamese who claimed they'd been injured argued in a federal court in New York in 2004 that Agent Orange should be classified as a chemical weapon. The suit was dismissed in 2005, though that ruling is being appealed, with a hearing set for June.

"The Vietnamese victims association was following the example of our veterans" - who in 1979 had sued over their own exposure, Gardner said. "The Vietnamese [government] was a little hesitant to bring it up with the U.S. government, because it's a delicate relationship. . . . It was opening a wound, a rather raw wound."

The film's title comes from the words of former American Ambassador to Vietnam Raymond Burghardt, his characterization of the Agent Orange issue. Narrated by actor Kevin Kline, the film includes an interview with a lawyer for Dow - the only one of the chemical companies that agreed to speak. It features Philadelphia-area activist and Vietnam veteran Frank Corcoran, who has been active on Agent Orange issues.

And it introduces Vietnamese families in which all three children, or all four children, suffer terrible deformities.

The link between exposure and birth defects is still debated; Vietnamese doctors certain of it, American scientists less sure. The chemical's enduring bequest, the film suggests, can be found in places like Tu Du Hospital, and in rural villages where little medical help is available.

Gardner, who lives near Princeton, has long produced and directed fine, Asia-based documentaries, including Precious Cargo, the story of the 2,000 children airlifted from Vietnam in 1975, and Dancing Through Death, about a Cambodian classical dancer who came of age under the Khmer Rouge.

Back in the mid-1980s, after the American veterans first filed suit, Gardner was working as a reporter at the Home News in New Brunswick when an editor dropped a pile of clippings on her desk and chased her off to a court hearing. That became her first personal contact with the issue, and with a suit ultimately settled for $180 million. Twenty years later, she's found herself back on the Agent Orange story.

"We're just presenting the case - we want the viewer to decide," she said. "It's the last issue of contention between the two countries."

If You Go
The Last Ghost of War is being shown at Temple University's Gladfelter Hall at 3 p.m. today, and at Princeton University's McCormick Hall at 2 p.m. on Saturday.
The film is produced by Pham Quoc Thai and Janet Gardner, and directed by Gardner.

Visit on the Web

Website for “The Last Ghost of War” (via the Internet Archive)